"Fain would they put out the light of Allah with their mouths, but Allah disdaineth (aught) save that He shall perfect His light, however much the disbelievers are averse." — Holy Qur'an 9:32

:: Candle Post #76 :: The Fundamental Role of Imamim Mubin in Our Spiritual Journey ::

Ya Ali Madad! On the occasion of Idd-e-Navroz please accept our heartfelt felicitations! May Mowla grant peace, prosperity, happiness, barakat, higher spiritual enlightenment, spiritual & luminous tayid (help) and empowerment to you, your family, your Jamat and the worldwide Jamat in the New Year. Ameen.

Let us first reflect upon the card which was prepared in 2005 by (the late) Alwaez Rai Amiraly Amlani: 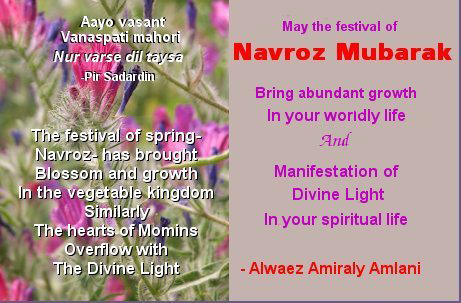 Explanation of artwork: This beautiful card has a verse of ginan by Pir Sadardin. The Holy Pir has used the analogy of rejuvenation of vegetation in spring to the enlightenment of soul. The soul is buried in our physical body and is yearning to go back to its origin where it can be eternally alive. Insight into the scope of this long journey is given through the following tawils.

"It is mentioned in verse (37:99): "And he said: Verily, I am going to my Lord, He will guide me." On this blessed verse there is a great light and a great secret unveiled for the people of knowledge. That is, Islam is the religion of nature, namely, the religion of progress externally and internally. Therefore, it is necessary to act upon the shari'at in the true sense and then to reach tariqat, haqqiqat and the desired destination of ma'rifat. Thus, this is meaning in the firm resolve of a great muwahhid (believer on One God) such as Hazrat Ibrahim: "I am going to my Lord." "
Source: A Thousand Wisdoms, Tawil No. 351, p. 190

Part 3: Tawil of Dhâhib (One who follows path of religion)

"The path of religion is the progressive ladder of the order of nature which is the example of the spiritual ladder as well as the example of the straight path and the rope of God. The wisdom-filled allusion of it is that as long as the world of unity is far away there are ranks on ranks: there are ranks of knowledge of the Qur'an, there are ranks in the deeds of Islam, there are ranks in the spiritual journey and proximity of God. Thus it is true that there are four major destinations of religion, namely, shari'at, tariqat, haqqiqat and ma'rifat and it is also true that Hazrat Ibrahim went to his Lord walking from one destination to another on the path of religion."
Source: A Thousand Wisdoms, Tawil No. 355, pp. 192-193.

"Internally the Qur'an and 'itrat (ahl-i bayt = Imam) are the same one light which is like a rope or ladder between the heaven and the earth, and this is also the straight path. The rope is extended from the supreme heaven to the earth, so that people may reach the Lord of the Throne through this rope or ladder of knowledge and recognition. This is the most marvellous as well as the most understandable example. Thus, when an arif (one who is seeking marifat) gradually progresses upwards, at every level he see the Qur'an and the Imam on the form of one Light. He sees the upper end of this luminous rope even in the presence of God, which is both the great Qur'an and the manifest Imam."
Source: A Thousand Wisdoms, Tawil No. 418, pp. 228-229

Part 5: Tawil of Sâdiqin (The truthful ones, those who are given Qur'anic wisdom)

"It is said in verse (9:119): "O you who believe! Fear God and be with the truthful." This wisdom-filled verse is revealed about the Imams from the progeny of the holy Prophet. The truthful are those only in whose forehead there is manifestation and miracle of the revealed light. Thus, it is the holy Imams who have the truthfulness and reality of the Qur'an and Islam (Da'aim, I, 21)."
Source: A Thousand Wisdoms, Tawil No. 493, pp. 263-264

"It is said in verse (11:56): "Verily my Lord is on the straight path." That is, the representative of God (the Imam of the time) is the path of luminous knowledge and guidance from the beginning to the end. And this is the tawil of the straight path."
Source: A Thousand Wisdoms, Tawil No. 501, p. 267

Part 7: Tawil of Sirat mustaqim (The living path of luminosity)

"Another example of the straight path is an ark, because the ahl-i bayt of the Prophet are compared to Hazrat Nuh's Ark. In this case the great secret is revealed that the straight path in reality is he who in his luminosity, carries the inner and spiritual travellers and makes them reach the ultimate destination. And this is a bright example of the True Guide."
Source: A Thousand Wisdoms, Tawil No. 502, p. 267

"It is said in verse (6:38): "Then in the presence of their Lord they will be gathered." The gathering (hashr) of the people of the world is first in the form of particles in the world of particles (aalm-i dharr), which is in the True Imam. Then there are examples of ranks. Then at the rank of singularity, all of them will gathered in the form of the Single Soul. This means that the people of paradise will first be in different ranks, and will gradually enter the sacred Sanctuary and become united only in One luminous body (haykal-i nur). This is the tawil of hashr."
Source: A Thousand Wisdoms, Tawil No. 331, p. 179-180

Synthesis:
On this auspicious day of Navroz, we now have a clear picture of the role of Imamim Mubin in our spiritual journey, which starts from this material world of multiplicity, through the worlds of spirituality (souls) and luminosity (lights) into the world of Oneness, where all realities merge into Monoreality.

Please may I request you to reflect deeply on the following? On a sunny day, when you look outside through the window of your office, house or apartment, you see that the sun is shining. With respect to spirituality, inshallah, one day the spark of light, which may be the size of a mustard seed at the present, will become the Real Luminous Sun and shine inside each one of us! After we recognize the Noor within ourselves, we get a chance to visit the spiritual houses of the Holy Ahl-i Bayt, just as Hazrat Salman-i Farsi did in the time of our Holy Prophet Muhammad (s.a.s.). Therefore, let us assess our relative position on the spiritual ladder and think of ways to recognizing our own souls first. Then, and only then, we will be empowered to enter into the luminosity of Noor Mowlana Hazar Imam, the Nuh's Ark of our time! Navroz Mubarak!

May Noor Mowlana Shah Karim Al-Hussaini Hazar Imam (a.s.) grant all members of the global Jamat the inner vision of the truth through ism-i azam. Ameen.

Links:
Festival Cards
Spiritual and luminous dimensions of NOOR Mowlana Hazar Imam (a.s.)
Ta'wil Postings on the Subject of Imam and Imamat
Recognition of the Light of the Holy Imam

Ya Ali, Ya NOOR Mowlana Shah Karim Al-Hussaini Hazar Imam, create Sunshine in our hearts, light in our foreheads, and bless us all with the inner vision of the Truth!